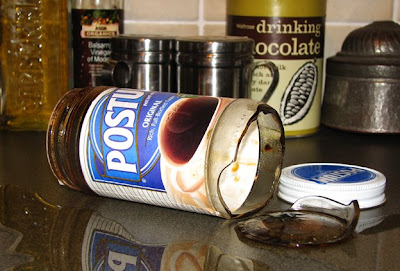 We are sad to report the extinction of the last Postum on the planet.

“What is Postum?” some may ask.

Postum was an instant coffee substitute made from roasted wheat, bran, molasses and corn. It was a “healthy” alternative invented in 1895 by CW Post — a student of Dr John Harvey Kellogg — who wanted to avoid drinking tea and coffee due to ill effects of caffeine. It was a Euro-American institution (in some circles) until Post/Kraft stopped production in 2007.

Postum was marketed by an invisible cartoon ghost named, “Mister Coffee Nerves,” who would appear in situations wherein normal human characters were shown in uncomfortable life-situations (e.g. irritability, lack of sleep, loss of athletic prowess) due to their use of coffee and its negative effects. These cartoons always ended with the humans switching to Postum and Mister Coffee Nerves running away.
— James Lileks, “The Adventures of Mr Coffee Nerves”

A jar of Postum was recently found in the dark corners of our pantry — probably the last Postum on the planet. The Postum in our jar was 21 years old (use by date: 1987). When it was opened a few weeks ago as one of Ani’s archaeological finds on our food shelves, it took a knife and some heavy pounding to flake off bits big enough to discolor a cup of hot water.

Given her discovery, my wife got on a Postum kick that lasted a few weeks, probably due to the early arrival of winter’s cold, and decided today was the day to finish the last Postum (extinction of a species — errr specious beverage in my view). It was to be a ceremonious, nostalgic, fond memorial service.

As we were making lunch, Ani, too cold to wait post-meal, heated water in the kettle, and without my being fully aware of what she was about to do, poured it into the Postum jar. Her logic was to get the last dregs she was unable to dig out by pounding knife.

Before I could open my mouth, the jar cracked. Ani had already whirled around to find her cup, at the crucial brewing moment. I knew she better not pick up the jar — the crack was loud enough to know she needed a towel fast. As I began to say, “don’t pick it up,” she did, and the last hot Postum on the planet ran across the counter, under everything, into drawers, the cupboards below, and finally to the floor.

Of course she was unhappy — I think more from not getting her last sip, than the hour it took to find and wipe cold smelly Postum from under every lid and drawer item, the back of our largest storage cabinet, every pot, Tupperware, and items unseen since we moved (“Ohhh, that’s where that was, I’ve been looking for that.”)

So our cupboard and drawers are clean, and our counters are decorated with Tupperware, glassware, and whatever’s been washed and left to air-dry before it all goes back in. An unceremonious end to our 21-year old instant hot beverage, Postum Original, Rich Full-Bodied Taste.