Inside the allotment fence: An outsider’s peek

For intro to the allotments, click here to see May 28 entry 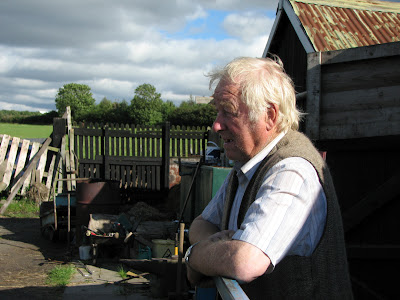 His mother died when he was 5. His father was the night soil man.** “We were poor,” he says, “We were so poor. You’ve no idea.” At 13, he got a job milking cows before dawn, before school. A year later he picked up night shift grooming horses and polishing harness of the horse-drawn hearse. Finally he ended up where most men in the Northeast did, the coal mines. He was 15. Today, at 83, Tommy Ramshaw has worked the fields and pastured horses more than a lifetime.

To get to Tommy’s place we enter the allotments by the gate near Harry’s chickens, pigeons and screaming geese. Harry assures me the geese are harmless. They raise their necks and shriek a terrible racket, chasing, waddling furiously, then suddenly abandon their target.

Beyond this excessive reception, the dirt path weaves along peaceful vegetable patches, chicken coops, and Tom Spence’s show-class flower garden. He’ll show his award-winning chrysanthemums tonight. “They must be perfectly round,” he says. The flawless have been wrapped in waxed bags, preserved pristine to vie for top prize. 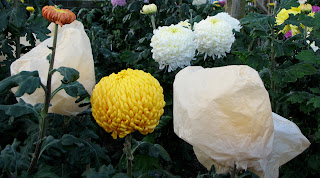 To keep cauliflower immaculate, Tom hides each in its own leaves tied with string. Soon he’ll harvest and enter them into contests with the leeks. “How big are the leeks where you come from?” he asks. Though I appreciate a milky-white cauliflower, I’ve never given the leek critical analysis. He exposes a leek the size of a barracuda the likes of which has never seen a supermarket shelf. 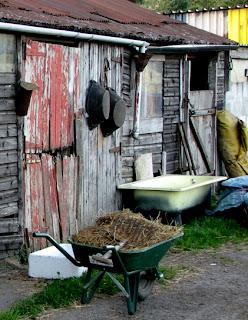 Progressing on, a peculiar theme emerges — the old-fashioned bathtub. Modern showers have expelled it from small locked room to wide open air. Here it finds new purpose — a cradle for growing herbs, a giant bucket for tools, the preferred vessel for watering horses.

Each fenced patch contains curious clutter. A reflection of the owner’s personality coexists with the produce of the season. From run-down broken sheds to perfectly-tended greenhouses. These are the props of the allotments. Plants live and die here. There are no secrets. 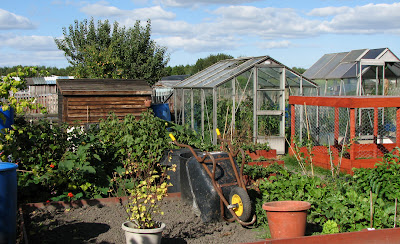 I stay on the wandering path all the way to the back. Tommy’s place is three minutes from our house. It’s taken longer to get there. I’m an outsider here, it is not my land. But the spell captivates, transforms. Like a snake, charmed, drawn from an ordinary basket case, one with nature.

Of the 40 allotment plots, Tommy tends four, where he plants vegetables and raises an undisclosed number of chickens. “Can’t tell you how many,” he says. “Sometimes, before the Chinese come to take the old hens, I may have more [than the allotted number].” He sells the elderly to the Oriental restaurant in town.

In the adjoining fields he breeds and pastures horses and a goat named Nancy. Harry is a darling horse. Due to illness he is temporarily quarantined in a stable. Laminitis can be fatal but he’s pulling through. Good for Harry. Good boy.


Quickstep is a Dales Mountain and Moorland stallion. He’s stuck in the stall next to Harry. You don’t have to have disease to be locked up. Stallions bear the same fate on Tommy’s farm. They are isolated until a suitable mare becomes available. (Some humans may benefit from this providence.) Quickstep’s nostrils luge out of the small opening. I’m sure I’ve seen fire. At least smoke. Tommy can ask up to £300 ($600) for Quickstep’s stud fee. He charges £80.

Tommy’s collection of brown chickens and the lovely black-and-white Light Sussex are territorial. Except for the one brown hen hatched with the black-and-whites, they are segregated by color. The brown ones lay brown eggs and the white ones, white. Phil’s blue Araucana chickens a few plots down lay blue eggs. Black hens, to my surprise, lay white eggs. Tommy counts 270 eggs a week. He sells some and shares the rest with the widows in the village. They get a dozen eggs every fortnight and Tommy receives cakes and pies in return. A mutually-favorable arrangement. He has diabetes but hasn’t turned down a cake, yet.

“You need a good freeze before you pull the turnips,” he says as I stand in a corner of turned earth where he’s planting brussel sprouts, “that’ll make ’em sweet and juicy. The beets aren’t any good now, they’re coming up cracked. Too much rain. Everything drowned this year.”

“Here.” Rising from the earth, he hands me 6 eggs. “I found them in the cabbages. Those bloody hens.” He digs up three red potatoes. The balance of power shifts in my hands. He points to a healthy batch of giant green squash in a rusty wheelbarrow. “Do you use these?” he asks. My eyes sparkle at the fresh, organic produce. “I found them growing on a pile of manure.”

**A night soil man’s duty was to collect the contents of chamber pots and earth closets (outhouses) in a horse-drawn midden cart. When the cart was full, the load was taken to an abandoned coal mine and dumped. There were four full-time night soil men in town and Tommy’s father was one of them. Jack Ramshaw’s midden cart can be seen at the Beamish Museum, County Durham.
Posted by Ani Holdsworth No comments: