The bonnie lass, Benny, and a birthday wish

Her name was Catherine. Her mother died when she was a baby. She had a brother, a father, but neither were eager to mind an infant. So newlyweds Benny and Annie Brown, the baby’s aunt and uncle, started a family, unplanned. “She was a bonnie lass,” says Benny, “She lived with us, and spent weekends with her father.”
. . .
Catherine loved to dance. After months of saving and a trip to Durham Market, Benny surprised his fair-haired angel with a pair of red leather dancing shoes. “She was over the moon,” says Benny, remembering his budding ballerina. “She skipped and twirled every chance she could.” 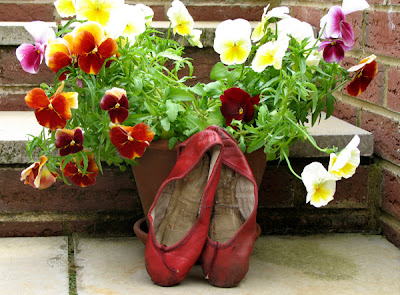 It was 1952; Catherine was 8. Her brother got off the bus first, and Catherine followed, golden curls dancing in the sun. She stepped off gently, hands cupped, sheltering a ladybird* to show her aunt Nann (Annie). It crawled from one hand to the other and up her arm...

Carefully guarding her precious cargo, Catherine skipped in front of the bus and into the street. The car in the next lane didn't have time to stop.

“Everybody said she was too bonnie to live,” says Benny.

Catherine died when Benny was 30. Last Friday Benny turned 85. His beloved Catherine would have been 63.

He still can’t bear to say her name. He refers to her as “the bairn.”

The birthday, the x-ray, and the hearing aid

The week of Benny’s birthday, his hearing aid broke. And Ben (the younger) needed his head examined (are we surprised?) — an x-ray to investigate a sinus infection that hasn’t cleared for two years. So on the morning of Benny’s birthday, with Ben’s x-ray order in hand, we piled Benny, his hearing aid, and his wheelchair into the car and drove to the hospital (still with me?) where we’d accomplish all of the above. Our reward was waiting in Barney (Barnard Castle): Lunch at Maggie’s Plaice, Benny’s favorite fish & chip shop about 20 miles South.

Benny waited his turn in Audiology while Ben went to x-ray. In less than 10 minutes, Ben returned. He’d been dismissed with no diagnostic imaging. “We no longer x-ray sinuses; your doctor should have known that.” The x-ray order was confiscated to reprimand his physician.

Benny was called into the audiologist who mended his hearing aid, fitted it to his ear and said, “How’s that?” “You can stop shouting now,” Benny said looking up from his wheelchair with a sly grin.

With our morning tasks finished in a flash, we got to Barney early. We ate in the car out of yellowed newsprint that wrapped our fish and chips with salt and vinegar. Benny and I think it tastes better from the paper; Ben prefers a square polystyrene** container and brings his own version of ketchup, the excellent English “HP Fruity Sauce.”

As I collected our leftovers to scatter for the birds, I saw some fish crumbs on Benny’s shirt. “You lost some fish, Benny,” I said. “That’s because I have a small mouth, you see,” he smirked. Benny was happy. We noticed he was able to swing his own legs in and out of the car, something he had been unable to do without assistance. He announced he had already received seven birthday cards. “I usually get ten,” he said, “but this year I won’t get one from Vera; so maybe nine.” Vera loved Maggie’s Plaice where we had a moment of silence in her memory (see May 7 entry for more about Benny and Vera). 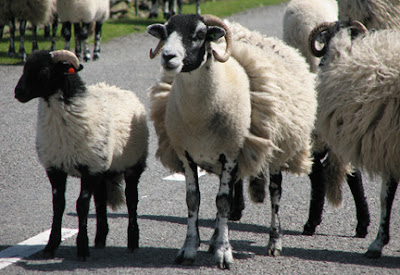 (caption) Weirdo. No, the sheep hasn’t been to the groomer, nor does he think he’s a poodle... If they don’t get sheared by early summer, they rub their fur off on fences. This oddity had done just that with extra-good success. (Others looked too scary to show.)

We drove over the moors toward home, stopped to take pictures of sheep and rabbits on rolling hills of heather, in sunshine, clouds, and even a little sprinkle.

Back at Benny’s we read all his cards and brought out the birthday cake. Since 85 candles would have required more than one cake and resulted in a small but adequate fire, for our party of three we opted for a single cake and a single flame. “Remember to make a wish,” I instructed. We sang. He paused.

He blew out his candle. “Did you make a wish?” I asked.