These are a few of my favorite things

I was 9 when The Sound of Music was released worldwide. On our small island of Cyprus, in my Armenian Elementary microcosm, it became the talk of the playground. Every spare moment was filled with its tunes.

“The first three notes just happen to be...”

Though I’d learned dó-ré-mí on the piano, my understanding of the English language was rudimentary. I didn’t know a female deer was called a doe. The fact that there are no deer in Cyprus furthered my befuddlement. The only deer I knew existed in the first line of a letter: Dear so-and-so. So, I concluded, this was “a female dear,” or, a “girlfriend.” Ré was pronounced ré, not ray, everyone knew that. “Mí, a name I call myself,” my friends said was an abbreviation for María. To our young literalist minds, the associations in the song made little sense, so we reinterpreted their mysteries and explained them to each other.

My friends saw the movie over and over. And every recess, munching bologna sandwiches on sesame buns (cheoregs), they acted out the parts and sang in broken English. Several of the songs also held high positions at the top of the charts on radio. I, too, fell in love with the music and longed to see the film. Yet, in this pre-video, limited-TV era, I had never been to a movie theatre. And though my parents were reasonable people, it was unlikely we would go. We didn’t do movies. It was wrong to enter a theatre.*

One day, to our surprise, teacher announced the school had organized a field trip to a matinee of The Sound of Music. A roar of excitement surged through the class.

At home I asked my parents, expecting a "No" the answer. Father explained, “As you know, we don’t go to the movies. But we have heard it is a good film. Since it is school-sponsored... We’ll leave the decision up to you, and we won’t be angry if you choose to go.”

This was unexpected. The unprecedented freedom to exercise freewill weighed heavily on my 9-year-old shoulders. To go or not to go resulted in incredible anguish.

I went. And as soon as I took a seat, my upbringing began to haunt me. I broke into sweat. Maybe I shouldn’t have come; maybe this was wrong...

The lights dimmed. The movie rolled. In agony, I plunged into a self-imposed “battle between good and evil” that had been spoken of often in church. So I watched the entire film with squinted eyes. In my juvenile mind, this was a form of non-committal... I wasn’t fully there if I watched dimly through quivering eyelids. 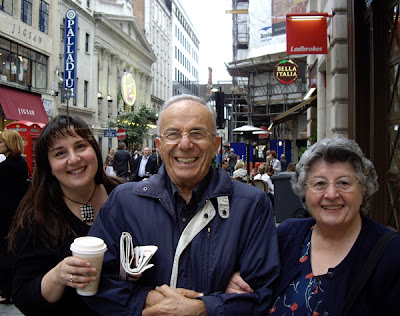 Parents Moses and Alice with sister Sylvia in London

Last week, Sylvia and I treated our parents to the London stage production of The Sound of Music. “We’ve planned a surprise for you,” I announced, hoping to provoke moderate levels of cheerful anticipation. Mum immediately declared she would not cooperate, remembering a surprise-gone-wrong birthday party where she appeared in house clothes and endured inconceivable embarrassment. Thus she pronounced, “Don’t surprise me, I don’t like it.” Bub (Father), ever-anxious to extract a clue, imagined a tangible gift. “What color iz-eeet?”

The duelling banter continued, half-excited, half-unsettled. I went to the toilet where great ideas are born and returned with a plan — let’s develop the clue without giving it away.

“It is exactly those colors,” I exclaimed reentering the conversation, “It’s green brown and tan!” Mum’s anxiety escalated. My toilet-bourne brainstorm was thrown out the window. We abandoned the surprise element and presented Plan B: our prepared duet. “The--- hills are alive, with the sound of muuusic (a-a-a-ah)...” 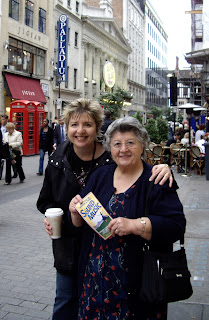 Securing last-minute tickets to a sold-out show was no small feat. Our only chance was the possible release of a few seats ON the day from those slated for the Producer. Miraculously, on the morning of the show, we had 8th-row center tickets. People sitting near us had bought theirs in January.

Within walking distance of Oxford Circus underground, the London Palladium is an exquisite venue. In the 1800s the site was a bazaar, then became a circus, and later an ice skating rink. At the turn of the century it was redesigned by the renowned Theatre architect Frank Matcham and opened in 1910 with the then massive capacity of 3,435. By the mid-1900s the Palladium was presenting high-priced big-name acts such as Judy Garland, Bing Crosby, Sammy Davis, Jr, Johnnie Ray, Frank Sinatra and the Beatles. After extensive remodeling, the Palladium now seats 2,300, maintaining a surprisingly intimate ambience. The Sound of Music opened here in November 2006.

We were apprehensive about a stage interpretation of an award-winning movie, but within moments it was clear the production would not disappoint. The set was fantastic and the choreography, acting and singing brilliant. A curious detail we had never seen before were individual, tiny, nearly-invisible mics taped to the actors’ foreheads. The only letdown, we all agreed, was Baron von Trapp (Georg, pronounced “Géyor”); in short, he was no Christopher Plummer. Still, the hills were alive, literally. The show opened with a “real” suspended hill, and ended with enormous Nazi flags that parachuted from the ceiling and turned our entire theatre into the audience for the von Trapp Family Singers.

To put behind us Mum’s unforgettable birthday catastrophe schemed by well-intentioned friends, and, for all our remaining life disasters sure to bulldoze any time and without warning: “I simply remember my favorite things, and then I don’t feeel soo baaad.”


Interesting trivia from http://en.wikipedia.org/wiki/The_Sound_of_Music
During the Cold War, in the event of a nuclear strike on the United Kingdom, the BBC planned to broadcast The Sound of Music on radio as part of an emergency timetable of programmes designed to “reassure” the public in the aftermath of the attack. A television broadcast would not be possible as televisions would be rendered inoperable by the electromagnetic pulse effect.

*I grew up in a conservative Christian home where movie theatres were considered “worldly” and inappropriate. When “The Greatest Story Every Told” came to Cyprus in 1966, we managed to convince my ultra-conservative grandmother to take us to a matinee showing. She was extremely nervous about entering the theatre but left there speechless.
Posted by Ani Holdsworth