His face is flushed, sweaty. He heaves a massive plank into an enormous tree. Repeatedly. In the rain. The ground is littered with leaves, branches. He’s insistent, consistent, determined. “Have you lost your ball?” we ask young Jack whom we greet often on our daily walks. “No,” he shouts high-pitched and out of breath, “I’m knocking down conkers.”

What? Totally uninformed, we ignore his childish endeavor and trundle on.

One year later, in September, the crazed quest repeats itself. Grandmothers wielding sticks scale barbed wire fences while children collect in plastic bags. Young boys hang from trees, parents drive from village to village, all in pursuit of the same prized object. Bags of it.

A conker, we learn, is the fruit of the horse chestnut tree — a hard, shiny brown nut inside a prickly case. If left to ripen, the outer shell cracks and falls from the tree. But England waits not for nature to take its course. The game of conkers heralds the new school year, and collecting the crop occupies children and grown-ups alike. Finding a pristine tree is paramount. Trespassing is forgiven. 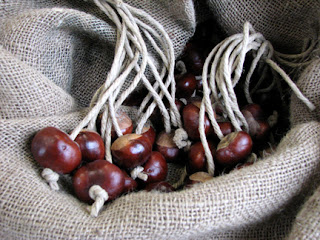 With many schools banning conkers for fear of unruly behavior, this quaint seasonal game may soon face extinction by sophisticated predators — Nintendo, PlayStation and Xbox. Still, for this year, let the games begin. To prepare, each nut is carefully drilled, a 10-inch cord strung through the hole and knotted at the base. Played in teams of two, the goal is to smash the opponent’s conker to smithereens and send it flying off its string. (All done in an orderly English fashion, of course.)

For the best chance of winning, a conker must be as hard as possible. Conkers dried a full year guarantee conquest against new nuts. However most collectors seek instant gratification, so various methods of hasty hardening are undertaken. Soak or boil them in vinegar, bake them briefly in the oven. If a microwave is used, watch them explode before your eyes. (Do not try this at home.) It should be noted that artificial hardening is considered cheating.

Over 6 years of observing search-and-collect missions, we had never seen a game. On Sunday October 7, to expand our horizons and broaden our English experience, we set off to the 2007 Conker Championships at the nearby Shildon Elm Road Workingmen’s Club. We arrived late, expected queues, but managed a spot in the car park. Inside we found hundreds of conkers strung ready for carnage. Colin, the coordinator, scurried about preparing to team opponents for battle. Children’s teams; men’s teams; women’s teams. The press was there — a reporter and a photographer. There were ribbons for first, second, third place; for biggest conker in the show, for most nuts cracked in the game. As for contestants, Kieren and his uncle Chris. That’s all. 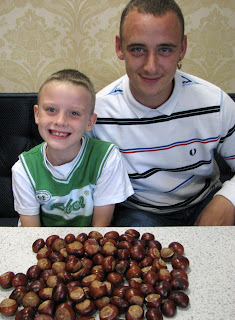 The first recorded game of Conkers using horse chestnuts took place in 1848. Before then, snail shells or hazelnuts were used to play the game. World conker championships take place the second Sunday of October in Northamptonshire, England.
Posted by Ani Holdsworth