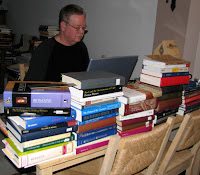 Left, and above, are views of our living/dining room (otherwise known as sitting area and eating table). This state of insurgency began in Summer of 2006, when Ben O’When and his chief operative known simply as Apostle Paul moved South (downstairs) to occupy this space until talks resume to renegotiate a peace treaty with neighboring factions to evict at least one of the settlers. Sources say the situation is unlikely to resolve until the degree is in hand. Chief security spokeswoman observes that it is a peaceful siege, with minor riots and no injuries reported thus far. Investigators indicate a solution could be imminent.
Posted by Ani Holdsworth

I was a student of "Mr. H" at OJA in I think 1982-84. I was Jennifer Hamilton, on the chance he remembers me. Might have to get out those OLD yearbooks. Wondering if I could get in touch with him.
Thx

Hi, Jennifer,
Your email wasn't available, so I'm leaving a message here hoping you'll revisit. Go to "View my Complete Profile" where you'll find our contact info; click to email.
How OLD you 8th graders must be now!!! :) Hope to hear from you,
-- Ani