As in the days of Noah

After a very dry Spring, the past ten days of Summer have seen nonstop rain. During that thirsty season, just before the rains came down and the floods came up, we bought a bird bath to entice more fowl into the back yard where both our office windows face. But none seem interested in a clean bath when muddy puddles abound.

A week goes by. Not a single bird. Finally, an English sparrow shows up, stands on the edge and stares, like, “What are you people thinking? I could have told you no one would come.”

But today, with only a drizzle in the air, a giant pigeon lands and nearly topples the structure over (we were expecting smaller birds, finches and such). Like the sparrow, the pigeon sits for a span, stares into the house, and says, “This is a nice perch, and after I get through you’ll have to rinse it all out for the others.” 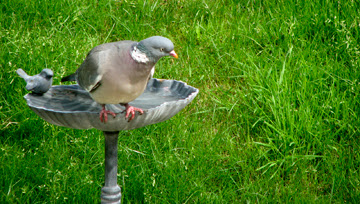 The fake bird on the edge is apparently intended to provide the power of suggestion to the feathered community that this bath is theirs, that this yard is indeed a bird sanctuary. So far, no good. And today we noticed it’s beginning to rust. I wonder if Noah had rust issues. His troughs had to endure 40 days and 40 nights of rain. Ours has only been out two weeks.
Posted by Ani Holdsworth

Last week we had a hawk that sat on the edge of the bird bath in our backyard for 90 minutes. I kept waiting for the hawk to fly away. Finally Steve got the video camera and took several minutes of the hawk as he surveyed the surrounding trees and bushes.