We bump into her group at the Ave Maria installation by Maurizio Cattelan: Three male right-armed salutes protrude from a white wall. The first, she says, “represents Hail Mary, when Angel Gabriel announced she is to become the mother of God. The next arm...” She draws a blank, walks to the wall, reading glasses to nose inspects the plaque. “Yesss.”

“The second,” she continues with authority, “is Hail Caesar, and thirdly, Heil Hitler, representing the ideologies that killed the Son of God and tried to wipe out His children.”

A petite figure garnished with pure white hair and sweet smiling eyes, the tour guide lectures in melodious speech with hints of Frenchness.

Before this chance encounter we had explored the museum for several hours. We read the fine print beside each piece, studied brush strokes by hands of Masters. In the dimly-lit Rothko room that swiftly siphons joy, some gazed in awe, some in disbelief. After an informative film, I conclude no one’s interpretation of Modern Art is reliable, not even the artist’s. Each voice expressed in color, texture, shape, speaks to another in an unknown tongue. Awakening the desire to know, to understand, may be an artist’s highest purpose.

As we eavesdrop on the tour in progress, the idea of a guide suddenly seems agreeable. We linger two steps behind. As promised, she says, she’ll conclude in front of Picasso.

“I shall tell you now a story from many years ago, when I was a young girl in Paris.”

“I walked to Picasso’s studio every day for many weeks. There, I stood in front of his door for hours for my chance to go inside, and to meet him.”

A handful of fresh-faced fans, hopeful models, tireless pilgrims congregated daily — not unlike those who spend nights on cold sidewalks for a glimpse of their favorite rock star. When the mood struck, Picasso would summon his butler to select a few and bring them in.

One afternoon the door opens and she finds herself among the favored few. Crossing the coveted threshold, she presents the chocolates to the steward, wrapping now worn in a terrible state.

The group is escorted to the studio. Eager to see paintings, they discover the canvasses turned, facing the wall. Picasso looks up from his easel, surveys the lot, and points directly at her. “You. Follow me.”

He leads her alone up a long staircase, to a painting on the wall — a vulgar canvas he has recently rendered. She stares without reaction, stunned, dazed in his presence and by this exhibition of intense indecency.

“And I am wondering, what next?”

Our tour group moves in. She pauses. Months of anticipation — fondness, admiration, and now in the company of devotion — are intensely summed on her face. She clears her throat.

“Nothing happened,” she says in French inflection softened by London. “Which, I suppose, is a good thing, since many of Picasso’s women committed suicide, and I could have ended like one of them.”

“This is the end of the tour. Thank you.”

Without delay, part embarrassed, part proud, part enraptured — not unlike the day she met Pablo Picasso — she turns and walks away.

I catch her in the next room and ask if she would pose beside one of my favorites. She agrees. There are no signs but I suspect photography is prohibited in venues of priceless art. As security cameras move in, I expect someone to shout. I raise the flash (yes flash) and snap. 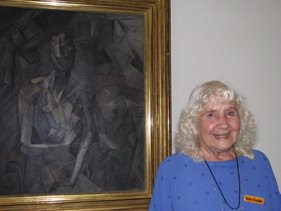 There is no way that’s all that happened with Picasso and the tour guide. Too bad we can’t mind read and find out the juicy details.