(All quotes from Wallace and Gromit, A Grand Day Out) 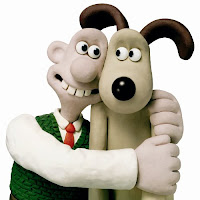 But organic and vegan... The first, in its purest sense, I’m unable to afford; the latter, too lazy to embrace.

In regard to veganism, I’ve adopted a less-than-ideal compromise. Much like “vegetarians” who eat fish and chicken, I presently drink soymilk and eat Feta. I’m a strict semi-vegan.

Dairy is simply better here. Exhibit A: Wallace and Gromit. In addition to gleaning awards for extraordinary claymation, they unexpectedly revived the nearly-bankrupt Wenselydale Cheese Factory into a thriving dairy. Exhibit B: There’s no exhibit B. Take my word, or that of the adventure-seeking clay creatures who traveled far to find fine cheese. 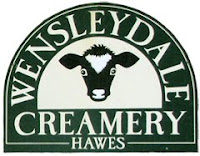 
“Everybody knows the moon is made of cheese”

It isn’t just the cheese. If Google can’t yield a proper vegan creamer for my decaf, I remain in the camp of the cowards. Us vegan wannabes insist on full-flavor low-fat substitutes before we convert. Oh, don’t go there... Tofu doesn’t work no matter how much vanilla you pour in. Puréed almonds (plus vanilla) was someone else’s “delicious” idea. Any recipe with vanilla is suspect in this regard. I’m not making a smoothie, I want a creamy coffee.

Organic, on the other hand, has become surprisingly feasible, with little effort and no extra cost.

In the British Isles, “Display Until” and “Sell By” dates are observed more strictly than the Laws of Nature. Whether animal, fruit or vegetable, dates stamped on every consumable product wait to be expired and marked to half price or less. Remarkably many of these items are perkier than their “fresh” counterparts. And organic foods at half price are cheaper than regular foods at full price. A routine survey of yellow mark-down stickers yields a bagful of organic stuff for less.

The sport has produced some interesting new flavors and unusual meals. Fennel in stir-fry was one such surprise. Celeriac soup, however, remains resident in the back of the freezer, a lifer beyond freezer-burn.

“A Grand Day Out”

In this milieu, join us on a recent journey to Hadrian’s Wall, as we muse the very topic of health and wellness while Ben obeys the speed limit (for a change) behind an ozone-wrecking truck in a no-passing zone.

“At this leisurely speed,” I observe, “we can enjoy the view and read the signs that point to interesting places.” Cough. “Will you please pull over and let this guy get ahead?”

Just then Providence smiles and we spot a hand-written card, not unlike “Will Work for Food.” With a crooked arrow pointing right, “Organic Café” it says.

We are driving through a region of two-farm villages named Once Brewed and Twice Brewed. 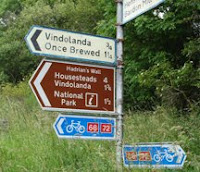 We’d be lucky to find any food establishment where second-century Roman ruins rule, let alone one
of the organic nature.

We agree to investigate and gladly trade our emissions trail for pristine farmland, cool crisp air, and the occasional whiff of honeysuckle and cowpasture.

We turn into a small courtyard. There’s a farmhouse to the right, a shed-turned-toilet in the center, and a cozy Café to the left. An elderly dog wakes, moves wearily to my car door and sniffs. Don’t jump, I say through my teeth. He walks away, too tired to waste time on a transient. A middle-aged woman is fetching coal. Quaint. Chickens free-range everywhere. Large metal milk jugs are stacked outside the shed-toilet. Organic cows graze in fields behind.

Inside the Café we review the chalkboard menu. We are the last lunch customers. She returns from coal duty. (Will she wash before she touches our food?)

There’s one piece of home-made organic quiche, she says. I relinquish that to Ben. I’ll forgo the cheese today.

They make their own cheese. Organic, she stresses. Never mind, I’ll have the soup. Red Soup or Green Soup. Named as they are, the options don’t tease my palate. I ask, “What’s in the Red Soup?” She utters rather smugly, “Red vegetables.” And in the green? I don’t ask. She thinks she’s clever. Against my better judgment, from the sparse selection on the board I choose Green Soup, which only interests me because it is served with Roman spelt muffins — a first-century bread recipe found at nearby Vindolanda, she says. She’s the owner, obviously proud of her organic fare. Can’t remember when she last stepped into a supermarket. Buys all her produce from local organic growers.

I’m instantly anxious she knows I shop at my neighborhood grocer. She’s given me the look. I flush, how very inappropriate of me. I feel disdain toward our irresponsible lifestyle, convinced I must convert — seek organic farmers, grow my own. My mind skips to our patio. I replace the pansies with parsley, add a goat to graze the grass...

Upstairs, there’s a loft with four small tables and a large window. We head for the view.

I’m not happy with what I ordered. I want to change it but she’s disappeared into the kitchen. We are committed. My eye moves from the distant panorama to the scene just below the picture window. 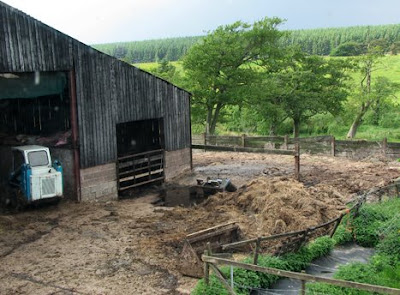 Transfixed on the manure pile with visions of “Green Soup,” I recall our College cafeteria where yesterday’s vegetables were routinely disguised into new and creative forms. Cauliflower-breadcrumbs-and-eggs, peas-and-carrots, all mashed into shapes, sometimes flat, sometimes round or conical, with gravy, always fried, never tasty even if named Petit Pâté d’Oeuf et Poissons.

My soup arrives piping hot. My muffins, too. Ben’s quiche is served with a generous salad of wild greens and sprouts. I rarely butter bread but no amount of spread improves these muffins. They would start a food fight in College. While Ben enjoys his quiche, I offer a taste of my soup in hopes of a reciprocal gesture. I’m awarded a morsel. It is absolutely delicious. He declines my soup. A second bite of quiche is unlikely. I pour in salt and pepper. I’ve no idea what’s in the soup. It’s ugly. I’m starving so I eat without looking. I can’t look at the view, either.

I contemplate offering her my mother’s lentil soup recipe aptly renamed “Birthright Soup.” Like Wallace and Gromit for Wensleydale, it would launch her little business into a new level. I don’t. Ben is quite happy with the meal I thoughtfully yielded. He is smiling. He throws a few salad sprigs my way. I do love the salad but I want quiche.

“No cheese, Gromit. Not a bit in the house.” 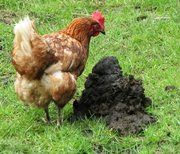 Ben Holdsworth wishes to comment with an image he captured on today’s walk:

This is what free-range organic looks like.
BH
Posted by Ani Holdsworth

Ani! Please contact me (Julie Holdsworth, graphic designer) I found you on Linkedin, but can't link to you because I don't know you, but I'd like to email you (modern pen pals) if you are game. I have only skimmed your blog, but will tell you that I was born after the release of "The Sound of Music" hence my first name, Julie, after Julie Andrews, as my parents were big fans.... Email me
kre8ive_one@earthlink.net !!! Cheers, Julie