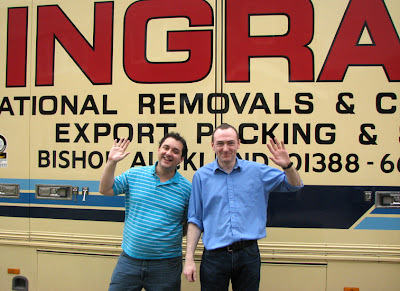 Our neighbors of four years moved out last week. “How very DARE you!”* We feel left-behind. Not because Florent and Michael progressed to a brand-new 3-story house facing the woods, but because they don’t live next-door anymore. We miss the clacking sounds from their posh kitchen, the coffee grinder late Sunday mornings, regular karaoke nights which crescendoed into the wee hours of the morning — a comical lullaby one wall away from the old show tunes. “New York! New Yo-o-o-o-ork!” Exuberance was the key. As the evening progressed, intoxicated notes and increased decibels rarely matched the actual melody. No worries.

Neighborliness comes with special requirements. Sounds and sights in every bedraggled state are expected and, one hopes, tolerated. This, perhaps, is what Flor and Michael had enough of. Too much bed-head on our back patio plucking dead pansies out of blooming pots. Not a welcome view from their back-yard botanical arboretum.

The end of the Flor-and-Michael era planted a new marker on the memorial path of neighbors past.

My first neighbors were my sisters. We lived not next-door to each other, but next to each other. Madeleine and Sylvia shared a huge platform bed, while I, the eldest, was entitled to a single trundle in the same bedroom. Not an optimal arrangement and perhaps why we all have great respect now for our own personal space.

Newbold College, Berkshire, England. On the second floor of the Victorian manor house Moor Close, six females shared the largest, draftiest room in the women’s dorm. Huge bay windows faced the quaint and beautiful Sylvia’s Garden, while inside two Iraqis, an American, a Finn, a Dane and myself — an Armenian Cypriot — shivered in rudimentary accommodation. With limited wardrobe space, we tucked suitcases under our beds to store the few clothes we owned, in my case insufficient winter apparel. Recently dislocated from my sunny island, completely disoriented, I catapulted into real cold; this was the year of numb feet. Mette, my next-bed neighbor, was a Dane with a 10-word English vocabulary. She worked the 4 a.m. shift on the Newbold farm (language skills not required), and set an alarm sure to wake up the cows and stand them in line before Mette arrived to milk. Those crazy Danes with loud, terrorist, blaring-old alarm clocks...

Columbia Union College, Maryland, USA. Here I progressed to the one-roommate room, an improvement over every year since childhood. I shared a bunk bed with Southern gals, Sharon first, and the next year, Jeanette.

Graduation. Marriage. Suddenly my space issues were modified to include someone not only in the same room but the same bed. Fortunately I could ease into this while Ben worked night-shift for some months, offering me the luxury of one BIG bed, all mine. (No doubt this contributed to my need to capture all available bed space even to this day.)

My calculations show that I’ve endured privacy deficiency since my sister was born just before my fourth birthday.

East Spruce Street, Winter Park, Florida, USA
In the duplex adjoining our first married residence lived a gruff old lady with an elderly bulldog. The dog howled all day while she engaged in long conversations with it, culminating into heated arguments while her pet moaned undogly sounds in contorted, wrinkled misery. In contrast, the house to our left contained the quiet Herman and Mary, New York snowbirds** who bore concentration camp numbers tattooed in Nazi Germany. Herman made delicious (if we used our imagination) chocolate chip cookies infused with Mary’s cigarette smoke.

Summertree Court, Longwood, Florida, USA
First house we owned, and, for various reasons, not one we wish to remember fondly. Greeks on our right, lesbians on our left — our neighbors were fine and had nothing to do with our distaste for this address.

Willow Springs Court, Apopka, Florida, USA
As houses go, our favorite residence of all time. Retired snowbirds** Carl and Betty on our right. Covert cryptic photographer on our left. Behavior noted over 4-year period: drives into garage and shuts automatic door from inside vehicle to avoid all contact with neighborhood. Years later we learned the police arrived by night and took him away. No one’s seen him since.

Thackery Court, Plant City, Florida, USA
Italian New Yorkers Mike and Kathy, and their beloved yellow lab, Rambler. Deliverers of exquisite pastries driven from their New York Italian bakery all the way to Florida. Years later, during a visit to Rome, we searched for the same with great anticipation. We discovered that the New York Italian recipes were a masterful improvement on the Old Country’s. (I also expected exceptional pizza and pasta in Italy, both of which were consistently disappointing.)

Crossways, St. Marks Road, Berkshire, UK
An old Victorian house segmented into five tiny flats, Crossways was “exclusively” reserved for married couples attending Newbold College (where Ben completed his MA in Biblical Studies, New Testament). While we lived there, the building housed Swiss, Croatians, Jamaicans, Ukranians, and us — American-Armenian-Cypriots. We found the following reality shocking in 2001 A.D: One of the five flats contained no toilet. Anne Laure, and later Ivo and Angelica, had to exit their front door, climb up the “common” stairs, and use the loo and shower in the landing. Don’t ask. Suffice it to say that we were offered, but kindly declined the opportunity to live there.

Which brings us full circle to County Durham, UK

Photo taken late April when the (gorgeous but evil) rape fields were in full bloom dispensing pollen like there’s no tomorrow. We live in the brick homes beyond the allotments.

...Neighborless and alone. Well, that’s not quite accurate. Directly behind us is an amusement park situation entirely unamusing to us: the loud family. Two children under 6 are encouraged to scream while playing on their swing set, by example of boisterous, high-pitched grandparents. Very unEnglish. On our left lives a constable (policewoman) and across the street a female police commander. Three houses down there’s a teenage autistic boy who jumps on his trampoline for hours, letting out a deep unrestrained bellow with every bounce. A few houses away, a yelping dog is home alone crying for someone, anyone. Finally, across the way and to the right is Wayne with the loud car. He’s moved in with his girlfriend. The girlfriend, 16, lives with her mum and stepfather. Wayne, 22, says his parents don’t want him. He has no job, he drinks and has a mean temper.

* Derrick on the Catherine Tate Show
**Snowbirds: Retirees who spend summers in their home States (usually Northern), and migrate to winter in Florida.
Posted by Ani Holdsworth

I have thought mostly fondly of the room mates I've had in the past. There has been the odd exception but until shortly before I met Joyce, I was rarely without a room mate of some kind. I did have my own room in Arizona when I was going to high school.
The least commodious arrangement, other then barracks life in basic training for the Air Force, was sharing a two bedroom apartment with two (2) other guys. For three (3) years, I slept on the floor on a futon , sharing the large bedroom with a very capable karate instructor. I dared not to offend. Despite this proximity and my mates' leisurely approach to cleanliness, it was a happy, healthy time for me. Other stories and other room mates. But this is your blog...