The backdrop, a dark, enormous space. 2,400 flickering tea lights swirl translucent shapes on colossal pillars. Objects magnified, shadows long, sweet smoke of incense in the air. Outside, the wind dances with Cathedral bells. Forty days after Christmas, on February 2, the Feast of Candlemas celebrates the presentation of Christ in the Temple.


“We’ll go to the grocery store, then the Cathedral,” we conclude, as if the 11th century structure is an ordinary detour on our way home.

“Let’s get there an hour early for good seats.” The traditional mantra for every Durham Cathedral event we attend sets our schedule in motion. To arrive in time for optimal pew is a matter of [self-indulgent] principle. Arguments can spark over 5 minutes’ delay that threatens to jeopardize the supreme seat. If you were of small stature you’d understand. And the acoustics in the back two-thirds of the Cathedral are, well, unsatisfactory. The organ is not always played at optimal volume. If you don’t sit at the foot of the pipes, you can’t feel music in your bones. Up front. In the quire, if possible. Next to the verger, even.

The seriousness by which we indulge in this endeavor, one might think we have no life. We arrive 55 minutes early. Once again, reminiscent of last year’s Easter sunrise service, we’re the first peasants to turn up. Lucky the door’s open, it’s freezing out. Inside, stewards are silently lighting thousands of tea lights. I volunteer to help. I am declined. Then, instead of walking directly to the coveted front row, I, in the spirit of graciousness, ask permission of a kindly steward. His reply is rudely interrupted by “the one in charge,” who points a long finger to the wooden bench at the back and says loudly, “Wait there till the candles are lit.” “But other people are in their seats...” she’s already turned her large stature to her next task, whirling her full-length faux grey-fox fir coat. Creating unnecessary draft.

I repeat my plight to Ben. His countenance has morphed into “the serious face.” It is a look I know well. “I’m not with you if you cause trouble” are words unspoken.

As soon as grey faux turns her busy back, I disappear into the shadows down the nave. The very front row is available but not always desirable. At the last minute this space may be reserved for participants. Or dignitaries. For peasants, four rows back seems safe. I save a place for Ben. The Cathedral seats a thousand, there are 5 people in the pews, best save a seat.

Ben joins me in row four. He says the man in the grey suit told him we can sit in the quire if we like...

Of course we like! I interrupt my trance with this new concern. Baby steps. Deep breath, relax shoulders. As soon as the choir concludes practice, stand, very calmly, and move, no, glide forward — with a smile (friendly and vulnerable), slightly bowed (appropriate humility), head forward (bad posture), eyes fixed (assertive interest) — toward the quire.

The quire affords a panorama of the darkened nave and a thousand flickering lights. We are each holding a program and a long taper candle which we light, one to another, before the ministers enter. Our service tonight will follow the mass from the Sarum Missal, in Latin. There will be no congregational hymn.

We rise for the choir and priestly procession.

A prayer. The choir sings the antiphon, and the priests, who just came in, begin to file out. The congregation is invited to follow them into the nave. We walk the full perimeter of the Cathedral candle-lit as the choir chants medieval plainsong. I’m directly behind a golden priestly robe and the incense-swinging clergy. I move into the path of fragrant smoke. I choke a little.

Back in our seats, the men’s choir is accompanied by the Wetheringsett organ, a modern reconstruction* of the instrument common in churches around 1525. This tiny structure sits in the shadow of the resident Victorian pipe organ (98 speaking stops in 7 divisions). The Wetheringsett consists of only 46 notes, about 3.5 octaves. No pedals. Period music was written consisting of these notes only. While the organist plays, another works two enormous manual bellows. The sound is clear, lyrical, flute-like.

Sadly, a blustery night and blizzard warnings have frightened the locals who found their home hearth or the neighborhood pub warmer than this service. In years past, Candlemas filled the Cathedral. Tonight there are fewer in the congregation than the choir and priests combined. Had more come, they would not have left disappointed. And there was plenty of room in the front row.

We linger to watch the candles extinguish, and leave quietly with the smell of incense in our clothes. 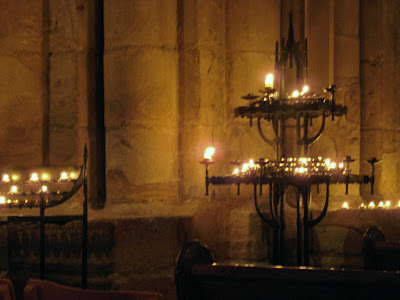 ______________________
*The Early English Organ Project was born out of a chance survival of an intriguing door in a farmhouse at Wetheringsett, Suffolk, found during conversion in 1977. The pattern of holes on one side and grooves on the other suggested a purpose, which was not revealed until shown to an organ specialist who recognized it as an organ soundboard of considerable antiquity. A replica of this pre-Reformation organ was completed in 2002 and has been touring various venues. There are no original (functional) surviving Tudor organs, and until now, very little information to go on. Music historians have had to rely on fragments, but with the 1977 find, it became possible to construct an authentic replica.

Many cathedrals, even churches, had more than one organ. Durham Cathedral once had five, three of them in the Quire for use at particular altars.
Posted by Ani Holdsworth

How I wish I had been there, freezing weather, incense and all. Your description of the evening was a colorful snapshot that will have to do until I can come in person.

It's like reading the words of a time traveler. I am transported. I am enlivened and intrigued. I can almost smell the incense. My mind wanders through thoughts of tradition and history in the church, of which I know so little. Thank you for this. Thank you.

FEAT OF CANDLEMAS 2009 — It’s been snowing all day, blizzard warnings in effect tonight. But we drove the 4 miles through nearly-empty streets to Durham Cathedral for probably our final Feast of Candlemas here. (We packed provisions — hot tea and biscuits — in case snowstorms hit en route.) We traveled through sleet-ish rain and at the top of Cathedral hill it was snowing.

Due to severe weather warnings the service was poorly attended tonight. We sat in the Quire directly behind the men’s chorus. Their music was candle-lit and toward the end of the program, during a very solemn part of the service, some choristers began to laugh. One of their candles had burnt into a rather large flame and instead of extinguishing it, they were watching, waiting to see what happened.

I’m glad to report the Cathedral was not consumed by flames, we’re not stuck in a snowstorm, and I drank the tea but saved the biscuits.